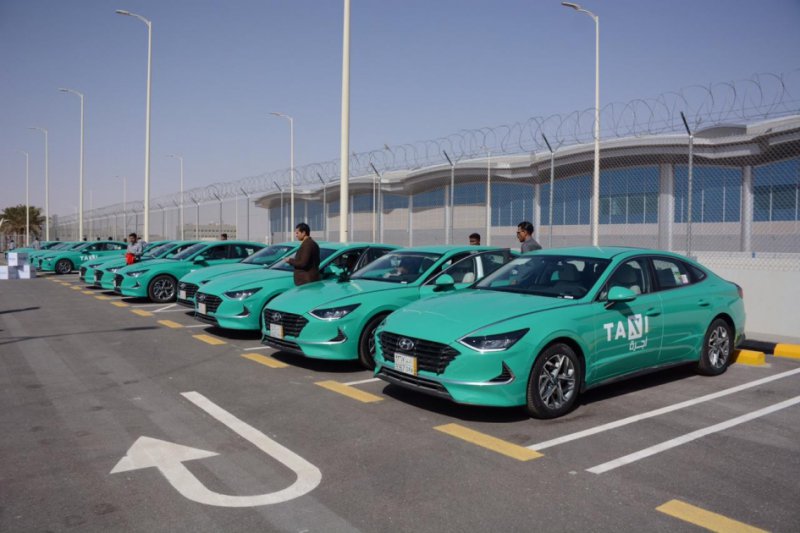 27-01-2020
H.E. Minister of Transport and Communications Mr. Saleh Al-Jasser participated in the launch of Airport Taxi services with its new identity after the operating company of the taxi services received 100 cars model Hyundai sonata 2020, which represents the first step towards moving into the future of sustainable transport and upgrading the level of transportation services to and from the Kingdom's airports after the adoption of the approved identity for the Airport Taxi, which was launched in cooperation with the Public Transport Authority.

Al-Safwa Limo Services, the company specialized in transport and communications, which has won the tender for the operation of taxi services with its new identity, has received from Almajdouie Motors, the first batch of the new Hyundai Sonata 2020, which is equipped with the latest equipment and technology to serve and secure passengers to transport them to and from some of the kingdom's airports, including King Khalid International Airport in Riyadh, the new King Abdulaziz Airport in Jeddah, and a number of other airports in the Kingdom.

Noting that the General Authority for Civil Aviation (GCAA) had earlier confirmed the launch of airport taxi services in line with The Kingdom's Vision 2030 which is related to the quality of life, including sustainable transport services. Commenting on this remarkable step, Mr. Yousef bin Ali Almajdouie, Group President and Chief Executive Officer of the Automotive Sector of Almajdouie Motors, expressed his happiness in participating in the launch of the Airport Taxi Service by providing the right new Hyundai models equipped with the highest technology to keep pace with the development of transport services in the Kingdom, and Said: “We have begun to deliver the first batch and will deliver the remaining cars allocated to Riyadh International Airport, afterward, we will deliver a new batch of Sonata 2020 to operate at King Abdulaziz Airport in Jeddah from the 2020 Sonata."

Meanwhile, Mr. Nasser bin Dhalif, CEO of Al Safwa Limo Services, expressed his great happiness at the launch of the new airport taxi with its new identity, and said that they seek to achieve full integration in the transportation services that they offer in the kingdom's airports, and expressed his thanks and appreciation to Almajdouie Motors Company - Hyundai for its response by providing the required models and equipping them to be at the service of passengers. Hyundai Sonata cars have been selected by Almajdouie Motors Company for its quality and grandeur, on one hand and its high specifications required for this service, on the other hand, concluding: "Soon we will recruit Saudi women drivers.”

Noting that Hyundai Sonata car, which will be used in the airport taxi, are subject to high standards to ensure the protection and safety of passengers and users. The cars are equipped, by the operating company, by cameras inside the car cabin also equipped with digital panels’ devices with integrated applications, as well as electronic meters for the applications prices. This is all adopted to keep pace with the development of the era and the transport service in the Kingdom.