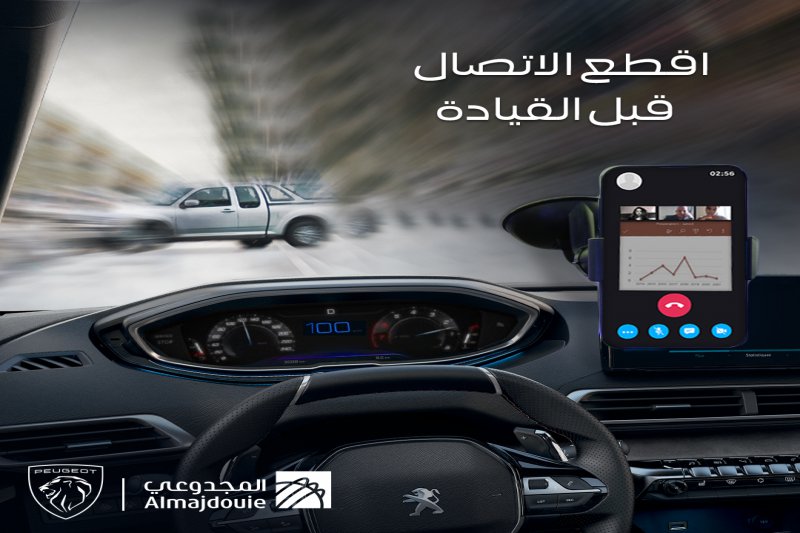 24-11-2021
Almajdouie PEUGEOT, the leading European auto brand, announced its second road safety campaign, Disconnect Before You Drive, which was launched following a study conducted by Peugeot showing that more than a third of drivers conduct meetings and conference calls whilst driving.

The first of its kind study in Saudi Arabia, conducted in collaboration with YouGov, revealed the range of distractions commuters experience whilst driving, with over 70% of drivers in Saudi Arabia using video conferencing platforms while driving. The study showed that a very large percentage of 65% of drivers conduct calls with their videos on, whilst nearly 7 out of 10 said they did feel more distracted on the road whilst doing this.

Nearly 4 out of every 5 drivers reported that they use video conferencing platforms more frequently now than they did pre-pandemic. The study highlighted an important matter, which is that in Saudi Arabia, the most prominent reasons are due to personal or work-related matters, with meetings outside working hours considered a major problem.

The 'Disconnect Before You Drive' campaign is being launched with an impactful brand film [watch here], which PEUGEOT hopes will encourage customers to think before connecting to video conferencing apps whilst on the road. The campaign will then be supported by wider radio and social media campaigns to promote further awareness.

The campaign follows the successful )Buckle Up!( project which was launched earlier this year, and promoted safety on the roads to school children and their parents.